With just a week to go until the inaugural Pan Celtic Race is underway, here’s another historical piece about Celtic Britain and Ireland, written by Roger Borlace, exploring the ‘Dark Ages’, myths of King Arthur and later Celtic Saints.

In the first few centuries AD, the Roman Empire expanded to include large areas of ancient Britain, bringing with it some cultural and technological developments, but also suppressing the local Celtic tribes. The Celts weren’t easy to govern, and the Romans never managed to conquer the tribes in Caledonia or Ireland. Starting in 122 AD, during the reign of emperor Hadrian, a wall was built from the Solway Firth to the mouth of the Tyne to clearly define the northern limit of the empire. Later in 142 AD, during the reign of emperor Antoninus Pius, another wall was built further north, between the Firth of Forth and the Firth of Clyde, but this was just made of wood and earth, unlike Hadrian’s Wall which was made of stone. The Roman army didn’t hold this position for very long, and the soldiers were soon brought back to the southern wall.

Eventually, starting around 380 AD, the Romans decided to withdraw their army from Britannia, because it was needed to defend Rome itself, which was being threatened by tribes from the north, the Goths and the Vandals. At this time there had been a fair amount of inter-marrying between the Celtic Britons and the Romans, and the resultant population are referred to as Romano-British. With the Roman departure, Britain became a land of tribal Kingdoms once more and with no overall army, the lands were vulnerable to other foreign invaders. This period is commonly referred to as the ‘Dark Ages’.

There are a few historical sources for this period, but there are also a lot of other legends. One important story concerns a British chieftain called Vortigern, which in Brittonic means ‘Great King’ or ‘Overlord’. Around 450 AD he was in conflict with some of his neighbouring Picts and Scots, so he invited some Anglo-Saxons called Hengist (stallion) and Horsa (Horse) to bring their soldiers over from the continent to help him. This worked in the short term, but back-fired badly when the Anglo-Saxons revolted, killed Vortigern’s son and decided to stay in Britain, forcing the Celtic peoples west and north. Vortigern’s fellow-Britons would have been understandably very angry with him, so he took refuge in North Wales to escape their wrath.

The site of Dinas Emrys, near Beddgelert, North Wales.

The legend tells how Vortigern built a fortress near Beddgelert, North Wales. The site is marked on maps as Dinas Emrys, near Llyn Dinas (the Welsh word ‘dinas’ refers to an iron-age hill fort). When building the fortress, the walls kept falling down, so Vortigern’s advisors suggested that he find a man with no mortal father and sacrifice him to appease the local spirits. A youth named Myrddin (Merlin) was selected for this purpose, but before he could be killed, he gave Vortigern some advice. He explained that there was water underground below where they were trying to build, so of course the walls would keep on collapsing. The water was duly drained, and the building successfully completed. There is a significant extra item in the legend. Merlin said that when he had the vision of the underground lake, there were two dragons fighting each other in the water, one white and the other red. The white one seemed to be getting the upper hand, but the red one would triumph in the end. The interpretation was that the invading Anglo-Saxons might seem to be winning for a while, but the native Britons would eventually be victorious.

This is the setting for the Arthurian legends, and Arthur himself is said to have had a Roman father and a British mother. The earliest reference to Arthur is found in the writings of the monk Gildas, who was born in Alclud (Strathclyde), Scotland in the 6th century AD. Gildas describes the battle of Badon Hill, where Arthur led a British victory over the Saxons. The tales come from a time when Celts were the predominant people throughout the land. Over centuries descendants would have shared folklore, keeping the stories alive with oral traditions. As more and more Anglo-Saxons came across the short stretch of sea to settle in Britain, their Anglo-Saxon language came to predominate in the south-east. But in the west and north, Cornwall, Wales, Cumbria and Scotland, the Britons maintained their Celtic language and culture, including the Arthur legends.

In 1136 AD an influential record of the Arthur legends was included in ‘The History of the Kings of Britain’ by Geoffrey of Monmouth. This helped popularise the Arthur legends and was referred to for several centuries as British history. In 1485 AD Henry Tudor became king of England and Wales. As the first Welshman to occupy the throne, he was proud of his Celtic heritage, and loved the old stories of King Arthur. At this time, one of the best-known collections ‘Le Morte d’Arthur’ was published by Sir Thomas Mallory. The legend is that Arthur pulled the sword Excalibur from a stone, thereby becoming rightful ruler of the land. He had a beautiful queen, Guinevere, and a company of faithful knights, who used to meet with him at a round table to make fair laws and policy. Arthur and his knights travelled on a quest to find the Holy Grail, which was said to have been brought to Britain by Joseph of Arimathea and its recovery would renew the lands. This parallels an older Celtic myth about a vessel that when drunk from quenches all needs.

Likely influenced by these tales, King Henry named his first-born son Arthur, with great hopes that he would rule in a new Arthurian age of honour and chivalry. Unfortunately, Arthur died before his father, so his brother Henry became Henry VIII. However, the spirit of the Arthurian tales lived on and they have been passed down through to the modern era with legends in Wales, Scotland, Brittany, Cornwall and Glastonbury. 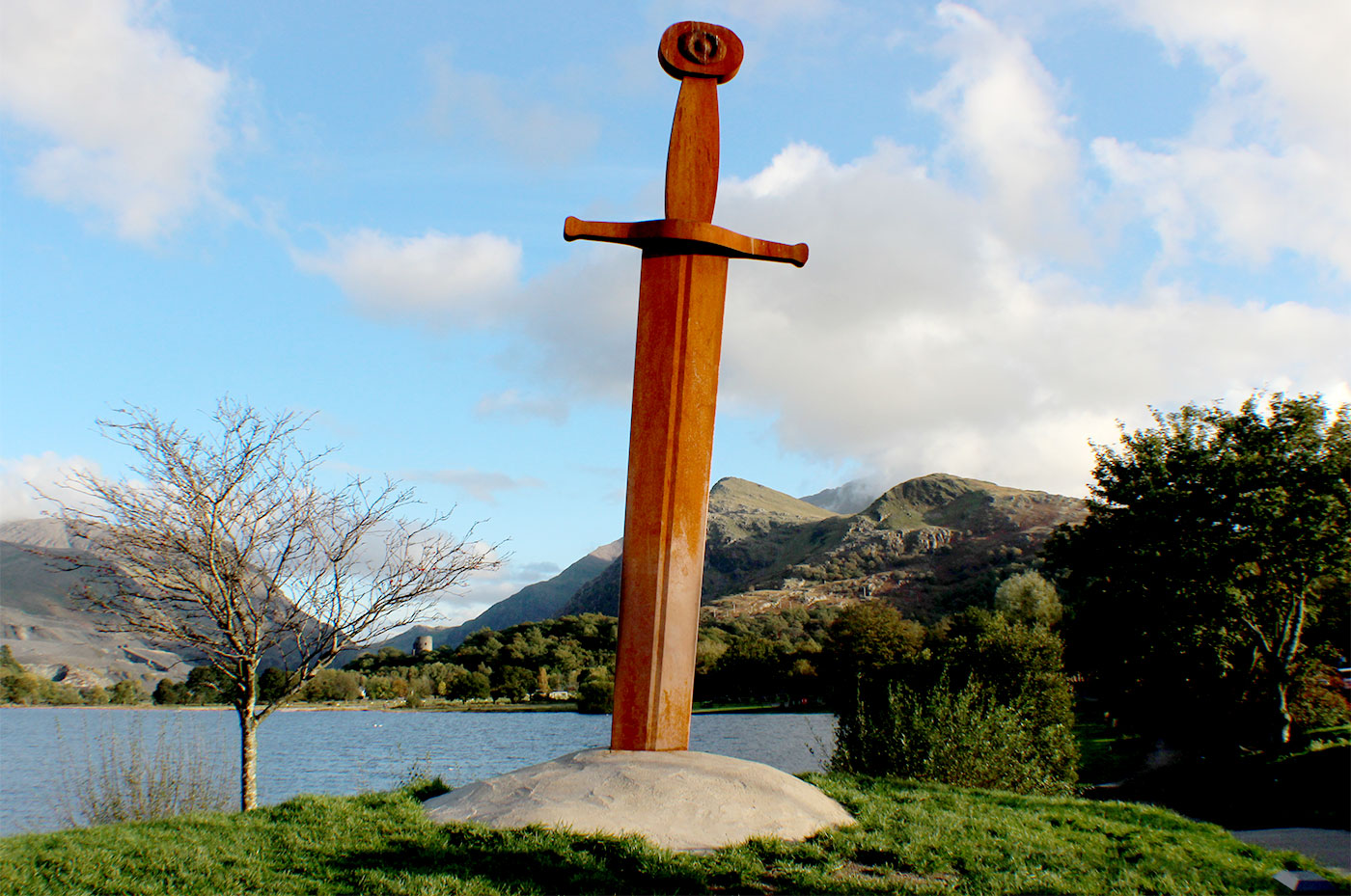 The Sword in the Stone monument at Llyn Padarn, Llanberis, North Wales.

At the time when Gildas was writing his account of Arthur, in the 6th century AD, Celtic Britain and Ireland had adopted a form of Christianity and the ‘old ways’ of the Celts were being replaced. There are many old monasteries and Celtic Crosses throughout the Pan Celtic Route for riders to discover, some dating back to this time. The Christian characters from this era have become integral to the identity of the lands and are known to us today.

The patron saint of Wales is Dewi Sant (Saint David), who lived in the 5th century AD. The cathedral in Pembrokeshire, a few miles south west of Fishguard, is named after him. At the end of his life his friends came to visit him and asked him to give them some last words to remember. He replied: “Do the little things.”

Patrick also lived in the 5th century. He was a Briton who became the patron saint of Ireland. So the story goes, this came about in a remarkable way. When he was a young man, living on the west coast of Britain, he was captured by slave traders, taken to Ireland and sold there as a slave. After serving there for several years, the opportunity came for him to escape, and he returned to Britain. But then he had a series of visions and felt compelled to return to Ireland and spread a Christian message. This he did, with considerable success, and there were soon many Christians among the Irish Celts.

Columba was an Irish abbot who lived in the 6th century AD. He established a base on the island of Iona, from which he and his fellow-workers travelled into Scotland, spreading Christian ideas. Two centuries later there were numerous Columban communities, and they produced the ‘Book of Kells’, an illustrated copy of the Gospels, generally regarded as the best example of this kind of work. The manuscript was originally kept in the Abbey of Kells, in County Meath, but is now stored in Trinity College, Dublin. Riders will pass very close to Kells during the Irish route, so can detour there for a short visit if interested.

Celtic crosses often used flowing knot work patterns in their designs which displays a reverence for the natural world – a trait common amongst early Celtic Christians. At Paisley Abbey, Scotland is kept the Barochan Cross, which is over 1000 years old and would have originally been covered in intricate Celtic designs. At Glendalough Abbey, Wicklow, Ireland there are some fine Celtic crosses still standing in the Abbey grounds.