As our Pan Celtic Race riders will soon be exploring the rich cultures and varied landscape of Celtic Britain and Ireland, here’s an overview of the Ancient Celts, written by Roger Borlace, to lay some foundations for further discoveries. Who were these people, where did they live and what stories and legends have come down to us over the years?

During the last few centuries before 1 AD the Romans and the Greeks thought of themselves as the civilised inhabitants of the known world. They considered the people who lived to the north as barbarians. The Greeks called them Keltoi (Celts) and the Romans called them Galli (Gauls). This didn’t mean they were a single nation and culture, although they did have some things in common, like the ability to make iron tools and weapons, and they used similar design motifs in jewellery and on carved stone.

These communities didn’t all think of themselves as ‘Celts’, for example – the Caledonii of northern Britain would not have thought of the Galati of Asia Minor as the same people. They would have called themselves by their tribal names, and these would not have been the Latin names we now use to refer to them. These cultures would not have spoken the same language, but as they left very little writing, it is difficult for us to be sure what they spoke. We have stone carvings dating to 5th Century BC, found in modern Switzerland, of a Celtic language called Lepontic, based on the Old Italic script. In Eastern Spain artefacts have been found of the Celtiberian script, which is based on Greek. Generally though we can only make inferences from what other people wrote about the Celtic cultures, and also from the languages that have evolved from the Celtic speech of the past, like Scots & Irish Gaelic, Manx, Welsh, Cornish and Breton.

By 4th Century BC many people in Britain were speaking common Brittonic, an ancient Celtic language. The Greek explorer Pytheas used the term ‘Prettanikē’ to describe the people of Britain, from the Celtic ‘Pretani’ – The Painted Ones, or People of the Forms, as some of the Britons painted themselves in patterns of dye and blue woad. The oldest documented names for the lands of Britain and Ireland are ‘Albion’ and ‘Iernē’, as written in ancient Greek, meaning ‘White’ and ‘Fertile Country’. By the 1st Century AD ‘Albion’ was still used to describe the land, but it was replaced by ‘Prettanía’ which became ‘Britannia’ – the Roman term which we know today. Further north, people continued calling the land Albion and eventually it became a name to describe Scotland, which is why to this day Scotland is also known as Alba.

A stunning example of Celtic craftsmanship is the Braganza Brooch, made on the Iberian Peninsular of Spain between 250BC – 200BC. This gold fibula features a Celtic warrior and his hunting dogs, with intricate spiralling patterns. One symbol which has been used since the neolithic era, across cultures from Minoan Crete to Newgrange, Ireland is the triple spiral (Triskelion). The Celtic peoples adopted this symbol into their cultures and it has been used to represent the three realms of material existence: earth, water, and sky and the three worlds: spiritual, physical, and celestial. In later centuries in Britain and Ireland, the symbol took on the meaning of the Christian Trinity. The symbol is still used today to represent journeys and new beginnings and is the central icon on the modern Celtic Nations flag, so it is appropriate to use this ancient and well known symbol for the Pan Celtic Race.

The Celts and Romans

As the Celtic peoples didn’t leave much written history, we must look to other sources to find out more about them. Unfortunately it is often war and conquests that provide more detailed accounts of people and places and this is the case for the Celts and the Romans. From 58 – 51 BC, Julius Caesar led a Roman campaign against the Galli in what is now France, and wrote an account, ‘The Gallic Wars’, which exerts a strong influence on our thinking about the Celts of his time.

‘All Gaul is divided into three parts, one where the Belgae live, another in which the Aquitani live, and the third where those live, who in their own tongue are called Celts (Celtae), in our language Gauls (Galli).’

During the campaign, Caesar’s forces encountered one of the tribal chieftains known as Vercingetorix (Great King of a Hundred Battles). Leader of the Arverni Tribe, Vercingetorix united his fellow Gauls and led them to victory at the Battle of Gergovia in 52 BC. Subsequently the Romans besieged and defeated the Gauls at the pivotal Battle of Alesia, where Vercingetorix surrendered so that his people and culture would not be wiped out.

While he was campaigning in Gaul, Caesar made two brief visits to Britannia, home of the Celtic Britons, in 55 and 54 BC. He described the appearance of the Britanni (Britons) who, during battle, had their skin painted with blue woad.

In 43 AD the Roman Emperor Claudius led an invasion of Britannia, and this time the Romans came to stay, at least for a few centuries. Some of the British tribes accepted Roman rule and began trading with them, reasonably content to live alongside one another in peace. However, the Romans took control of Celtic tribal capitals as a show of strength. One such location was the former capital of the Trinovantian tribe, which became the Roman capital Camulodunum (Colchester). A temple was built there, dedicated ‘to the god Claudius’, at great expense to the local population, leading to resistance.

Although there were a number of British tribes, rather than one single nation, they did share a common culture, which included Druidism. The Romans soon realised that the British spirit of resistance was nurtured by the Druids, whose stronghold was on the island of Mona (Anglesey), North Wales. In 60AD the Roman governor, Suetonius Paulinus, marched his army to Anglesey, intent on removing the Druids from power. The Roman historian Tacitus recorded their version of the events:

‘On the shore stood the opposing army with its dense array of armed warriors, while between the ranks dashed women, in black attire like the Furies, with hair dishevelled, waving brands. All around, the Druids, lifting up their hands to heaven, and pouring forth dreadful imprecations, scared our soldiers by the unfamiliar sight, so that, as if their limbs were paralysed, they stood motionless, and exposed to wounds.’

It is said that the Roman soldiers, ordered on by their Generals, went on to kill many of the Druids, and destroyed the oak groves. 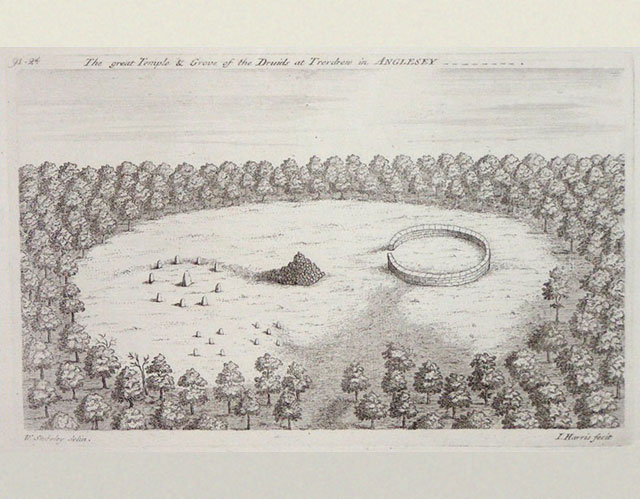 While the Roman army was in North Wales, something very dramatic was happening in the south east of Britain. The Iceni chieftain, Prasutagus, had made a will bequeathing half his wealth to his family and half to the Roman Emperor. When he died a company of Roman soldiers came to collect, and ignoring the will of Prasutagus, decided to take control of all the lands and assets. The chieftain’s wife, Boudicca, objected strongly, insisting that what the Romans were doing was illegal, so the soldiers flogged her and assaulted her daughters. Boudicca was justifiably enraged, and sent messages to her neighbouring tribes, asking them to join her in rising up. With Boudicca chosen as their leader, they went to Camulodunum, destroyed the temple of Claudius and killed the local people and Roman soldiers. Next they descended on Londinium (London) and burnt down the town.

By this time Suetonius Paulinus had gathered Roman reinforcements as he journeyed south, eventually leading an army of almost 10,000 men. We can envisage their route if we think about the present-day A5 road. Meanwhile Boudicca must have been told that they were coming, and led her army north to meet them. We don’t know the exact location of the battlefield, but tradition places it in what is now Mancetter, North Warwickshire. Tacitus recorded a speech that Boudicca allegedly gave before the battle, some of which is presented below:

‘…It is not as a woman descended from noble ancestry, but as one of the people, that I am avenging lost freedom’.

During the course of a day, the battle was lost for the Britons. No-one knows what happened to Boudicca, but with this pivotal battle decided, the Romans stayed in Britain for another three centuries and ventured further north, deeper into Celtic Britain. This is the time leading up to ‘The Dark Ages’ and the myths and legends of King Arthur, which we’ll explore in another story. 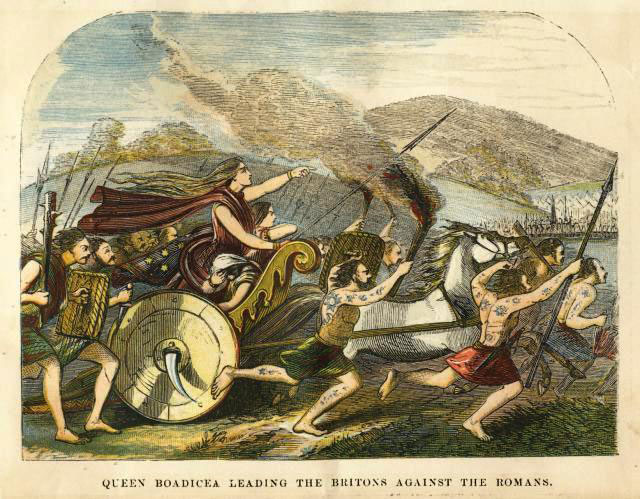